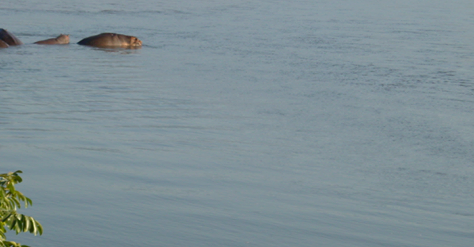 Government has launched an investigation into a suspected poisoning of hippos in Binga close to the Zambezi River. Environment, Water and Climate Minister Oppah Muchinguri-Kashiri confirmed the development last week. Reports suggest that at least eight hippos were killed in a fortnight. There are also indications that some villagers were eating the poisoned hippos, exposing themselves to danger. Speaking to journalists in Harare last week, Minister Muchinguri-Kashiri said investigations were in progress to establish what was killing the mammals. “Well, I heard about it that eight hippos were found dead, which is regrettable especially(at) this time of the year when our farmers are engaging in quite a number of agricultural activities. “And maybe because of lack of knowledge, they are using chemicals, either to make sure they address the issue of weeds and also even to spray the worms in order to save crops. “Without that study and knowledge to establish how much damage it has on fauna and flora, our wildlife becomes vulnerable in the process. So whatever that is put on the ground, ends up in our water. It affects our fish, our crocodiles, our hippos and we are seeing that this is a feature that we ignored in the past,” she said. Minister Muchinguri-Kashiri said the loss of the hippos follow the poisoning of elephants last year in Kariba and Hwange National Park. She said awareness programmes by the Environmental Management Agency will help address the problem. “We know we have lost some elephants due to poisoning in Kariba and EMA has a package of awareness programmes with messages to make sure that we educate the nation. “But this new feature has just come up. We had not experienced that in our rivers and we are taking this seriously. “Now we need to evaluate which type of chemicals they are. EMA is seized with the matter and once we establish the type of chemicals being used, we can map the way forward,” she said. Minister Muchinguri-Kashiri bemoaned the illegal importation of toxic chemicals.
“There are certain chemicals that were banned in Zimbabwe but they are still finding their way into the country through illegal means. This is a security matter because we register all toxic or hazardous chemicals that come into the country. It could be that this escaped us. We need to find out first. So the research is being done because we want to put the right messages out there. The scientists and those that are qualified to do so should advise us,” she said.